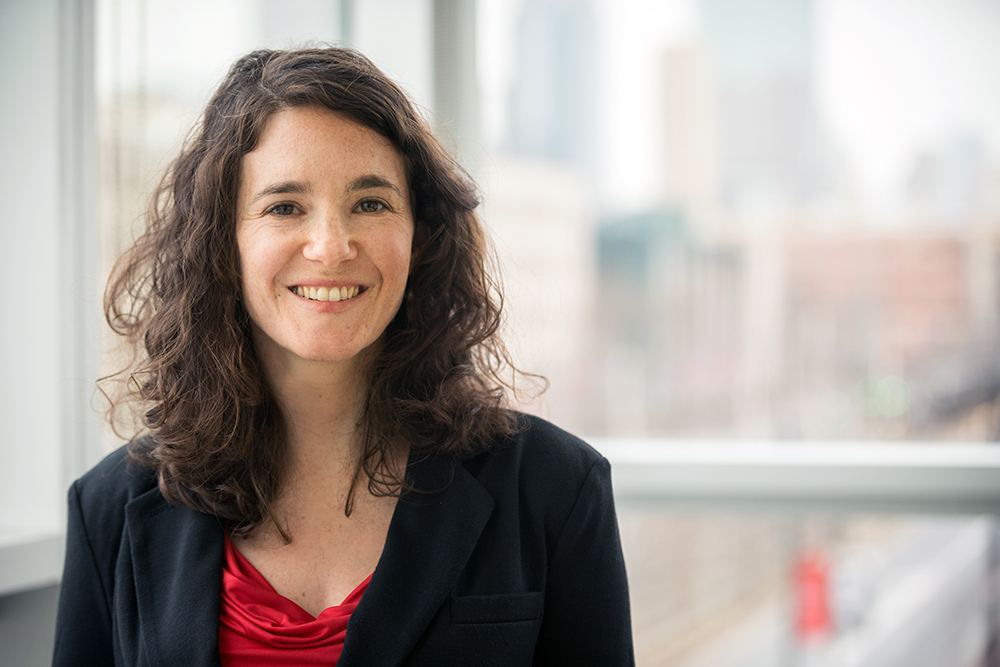 She specializes in Cryptography, zero-knowledge, and secure computation in the RAM model; she teaches the first-year course “Set Theory and Logic”, and is on the hunt for Masters’s students who love to solve mathematical riddles.

“In my first or second week at the Technion,” shares Weiss, “I attended an open lecture on something called zero-knowledge. The lecturer presented a problem: how something can be solved a certain way. The solution they offered was like magic, but I felt cheated like it wasn’t completely true. That was the moment I decided to study exactly that, but I needed plenty of mathematical background and couldn’t take the relevant course until my fifth semester. So I started my degree, a double major in Math and Computer Science, time passed and I forgot all about it. Only in my seventh semester I finally took a course on Cryptography, and discovered that I was indeed lied to: that lecture back then swept a lot under the rug – I knew back then that something didn’t add up, I just couldn’t put my finger on what exactly that was. I was hooked. The course was very fascinating, and when I graduated I went on to pursue my Masters’ under the supervision of Prof. Yuval Ishai. He let me work on a problem related to zero-knowledge, which eventually became the subject of my doctoral thesis.”

Dr. Weiss focuses on Cryptography, something she says she has been interested in since high school when she first read Simon Singh’s The Code Book. “In Cryptography we try to protect not only information, say my credit card number when I shop online, but also computation,” she stresses. “A good example for computation protection is called the Millionaires’ Problem: say that there are two millionaires, who want to know which of them has more money, without revealing to each other exactly how much money they have. The problem was solved in the 80s; there’s a way to compute who has more money while maintaining two things: one, neither one discovers how much money the other has, and two, neither of them can distort the computation to make it seem like they have more money. Cryptography provides an answer that guarantees that the outcome – the computation – would be correct and that the data – information – will remain private.”

Her PhD, which she completed at the Techion’s direct track to PhD, focuses on zero-knowledge. “Zero-knowledge is about convincing you I know something, say, the answer to a Sudoku puzzle, or my Gmail password, without telling you anything else (so all you know is that I know). Not even the number on a single Sudoku tile. I find it incredible that something like that is even possible. Zero-knowledge was first introduced and studied in the 1980s, it’s a fundamental building block that’s used to solve many problems in cryptography, and their study of zero-knowledge is one of the things for which Prof. Shafi Goldwasser of the Weizmann Institute and MIT and Prof. Silvio Micali of MIT were awarded the Turing Award, the ‘noble prize’ of computer science,” says Weiss. “It’s relevant for cryptocurrency, for example – Bitcoin and the other cryptographic coins. Cryptocurrency is linked to a blockchain, a sort of large bulletin board that registers every financial transaction you’ve ever performed in the digital currency: who you bought from, how much it cost, who bought from you. It’s a very crude invasion of privacy, so the question is how can this be done anonymously; how do I convince someone that I have the money to pay for what they’re selling, without disclosing who I am, what my wallet number is, how much money I have, where the money came from… you can do that using zero-knowledge proofs. And yes, this anonymity issue has a solution – Zcash, an anonymous cryptocurrency that uses zero-knowledge to attain anonymity.”

After completing her PhD, Dr. Weiss left for Boston’s Northeastern University, where she began working with Prof. Daniel Wichs on cryptographic solutions for RAM machines. “Modern computers use RAM, where the computer directly accesses the memory locations it needs according to the action I’m trying to execute. But standard cryptography uses a different computation model – Boolean Circuits – which require that you read the entire memory before performing the calculation,” she explains. “In essence, this means that even the tiniest computation you wish to perform on your computer, say, calculate 2+3, requires the computer to read the entire memory, including images, Gmail history, every Word document… That’s impossible. It’s heavy, it takes incredible amounts of time, and the bigger your hard disk, i.e. the more memory it contains, the slower your computer would be. And this raises two questions: one, why does cryptography operate in a model that doesn’t fit modern computers? The answer is that cryptographic problems are complex and difficult to solve, and we as a community had to start somewhere. So we took the very complex model of the modern computer and simplified it until we reached a model in which we could accurately define the problem, and find a (relatively simple) solution. The second question is, if there’s a cryptographic solution but it doesn’t fit modern computers, then what’s the point? The answer is that cryptography is an evolving theoretical field. There are a lot of specific problems (the Millionaires’ Problem is an example of a specific problem) for which we already have solutions suitable for RAMs. In Boston I tried to provide generic secure protocols for the RAM model, that would allow us to perform any computation we’d like.”

After two years in Boston, Dr. Weiss returned to Israel and spent two years on her second postdoctoral project, this time at IDC, hosted by Prof. Alon Rosen and Prof. Elette Boyle. This past December she joined the Faculty of Engineering at Bar Ilan, in the computer engineering track. She continues to research Cryptography, zero-knowledge and secure computation for the RAM model, as well as secure computation in general, and secure machine learning protocols. This semester she is teaching a course on set theory and logic for first-year computer engineering students. In addition, she is taking on MA students. “I’m looking for curious, talented students who enjoy theoretic work and problem solving,” she clarifies. Dr. Weiss sees herself continuing to blossom in academia, but is most definitely open to collaborations with industry. She is already part of such collaboration with researchers at IBM. “I love seeing the things I do make it to the practical stage,” she smiles.