Research with a Heart 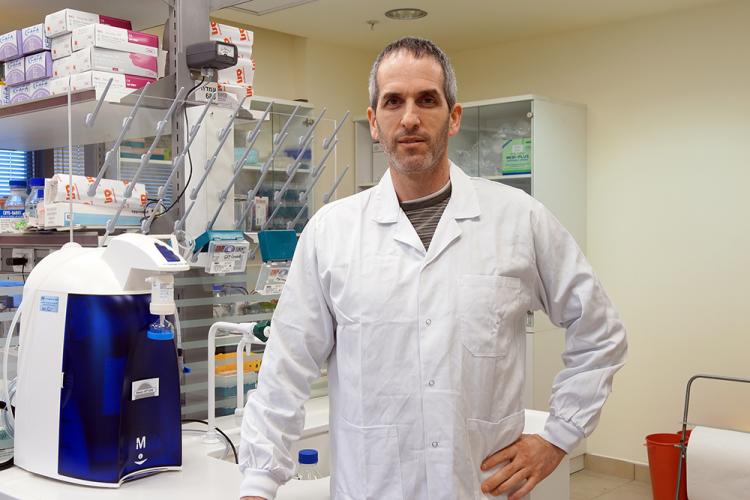 If you, or one of those dear to you, is taken to the hospital with chest pain, what you would want the hospital to have at hand is the novel technology for identifying heart attacks, developed by Dr. Amos Danielli of the Faculty of Engineering.

Not only doctors, but also engineers can save lives. The technology developed by Dr. Amos Danielli, which involves biological sensing using Magnetic Modulation Biosensing (MMB), can simply and rapidly detect proteins or DNA sequences that serve as the initial indicators of disease, and thereby assist doctors to focus on the more serious cases, provide quicker treatment, and save more lives. “We have developed a relatively small, box-sized apparatus, that can identify various proteins and even bacteria or viruses that may cause infection or disease, from the flu to tuberculosis, without requiring complicated and lengthy lab tests, and can serve not only hospitals, but also small clinics and field units”, say Dr. Danielli. “This technology is crucial for rapid identification of various conditions such as heart attack. Currently, when patients reach the hospital with chest pain, which is the second most prevalent complaint in emergency rooms, only about 8% have experienced a heart attack.  Rapid detection can assist with quicker discharge of over 90% of those that do not suffer from this problem, and thus lower the load on emergency rooms, and allow doctors to focus on treating those who have indeed experienced heart attack”.

Dr. Danielli, 46, married with three children, specializes in Electro-optics and Bio-photonics. After completing his Bachelor’s and Master’s degrees in the field of optical communication, he worked in industry for eight years. Among other projects, he joined the start-up company founded by his supervisor, Prof. Ady Arie from Tel Aviv University. When the company discontinued, he accepted Prof. Arie’s offer to return to his lab and begin his PhD studies. Several weeks after starting his studies, he met one of his relatives, a geneticist, in the halls of the University. “She was trying to identify the gender of a chick whilst still inside the egg. She told me that she can label DNA using a fluorescent molecule, and asked whether I could identify small concentrations of fluorescent molecules in solution. My PhD developed and advanced from that point”, he says.

How is all this related to heart attacks? “A heart attack is caused by the blockage of a small arteriole that transports blood to the heart muscle. The obstruction prevents oxygen-containing blood cells from reaching the heart, which induces necrosis – the death of heart muscle cells. During this process, the heart muscle cells secrete a protein, called troponin, into the blood. The faster we treat the obstruction, by treating with blood thinners (anticoagulants), or inserting a catheter to open the blockage – we can decrease the damage, and increase the patient’s likelihood to survive and rehabilitate”, explains Dr. Danielli. “Currently, except for using an electrocardiogram (EKG), which cannot identify the majority of patients that undergo a heart attack, a major standard for identifying heart attacks is detecting an increase in the level of troponin in the blood over time. Conversely, the finding of low levels of troponin in the blood, with no increase, is used to eliminate the possibility of a heart attack. Currently, the existing diagnostic tools are not sensitive enough for detection of troponin levels early after the onset of symptoms, and therefore identification of a heart attack usually takes between six to nine hours. Our technology can detect even minute concentrations of proteins, including troponin, which enables doctors to either diagnose or rule-out the incidence of a heart attack much earlier, and if needed, to provide earlier treatment”.

Dr. Danielli started developing this technology during his doctoral studies, and continued developing it during his post-doctoral studies in Washington University, St. Louis. During his stay in the US, he founded a company that commercializes this technology, and established connections with key figures in the fields of medical laboratory and diagnostics, and especially among troponin and heart attack specialists. His company, MagBiosense, Inc., has won many awards in international competitions, and has recently received generous funding from BIRD Foundation to develop the final product in collaboration with an Israeli company. The offer he received from the Faculty of Engineering in Bar Ilan University prompted his return with his family to Israel. “I’m very satisfied at the Faculty”, he says. “The atmosphere here is inspiring and productive, the work environment is young and lively, and my co-workers in the Faculty are people who are fun to work with, and whom I am happy to call my friends”.