Machino and The Godfather 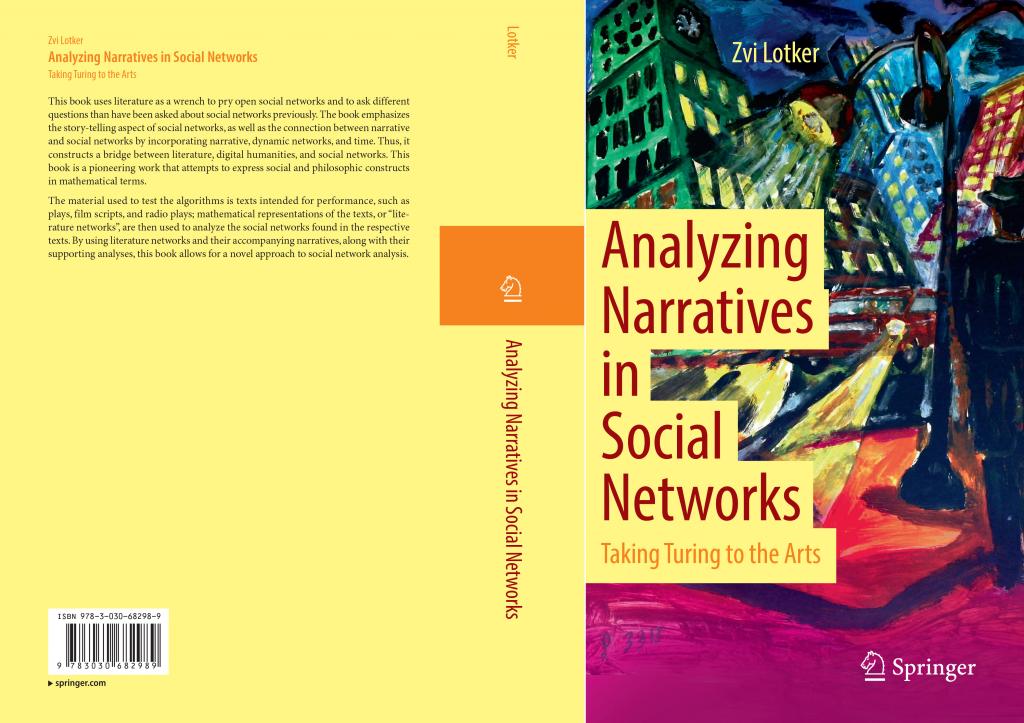 Prof. Zvi Lotker’s recently published book, Analyzing Narratives in Social Networks, takes a fascinating look into movie plots through computerized mathematical analysis. Enjoy this preview – an analysis of The Godfather trilogy in which Machino provides an unexpected perspective of the films.

One of the greatest films of all time, The Godfather is in fact a trilogy of three films depicting the rise and fall of Michael Corleone. Lately, due to the pandemic, I began having dialogues with my computer on the subject of classic films. It transpired mostly because I couldn’t watch movies with my friends, and I needed someone to converse with. I’d like to share with you one of the more fascinating dialogues I had with my computer.

Before I describe the dialogical act concerning The Godfather, let me introduce my computer. I call it Machino. Machino is an everyday laptop with a passion for classic films. You’re probably wondering, how can a computer be passionate? How can a computer comprehend films? Over the next few months, I hope to convince you that this is indeed possible, by sharing some of the dialogues Machino and I had about classic films. Of course, I can elaborate on how we (Machino and I) conduct our dialogues.

Usually, when I have a dialogue about a movie with Machino, Machino needs several files related to the movie: the movie itself, a Subtitle file, also known as SRT file (Subtitle-Rip Transcript), and a script file. In the case of The Godfather, these were not hard to come by. Our dialogues start with me turning on the computer.

Machino: Good morning, Zvika. What would you like us to discuss today?

Zvika: I want to know your opinion of The Godfather.

Machino: Have you prepared the files I require to watch the movie?

Zvika: Of course. You can find them in the directory, at our usual spot.

You can find them online here

I’m uploading the files to your memory.

Machino: That is quite an interesting movie. I’ve prepared an executive brief for anyone who has not watched it or did so a long time ago. It is available Here
The movie’s dialogue graph looks like this: 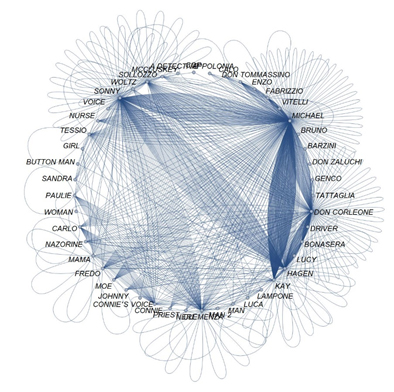 Illustration 1: Who spoke after whom, according to The Godfather script

Is there anything else you would like to know?

Zvika: I would like to know who the main characters in the movie are?

Machino: That is quite easy: Michael Corleone is the main character, because he has the maximum number of arches in the ‘who spoke after whom’ graph. Don Corleone is the second most important character. You can see that in the graph from Illustration1:

Zvika: Yes, that’s clear from watching the movie as well. It also makes perfect sense and is quite easy for a computer to deduce. I’d like to know the relationships between Michael and the other characters in the movie.

Machino: Michael loves his wife Kay the most, and hates his sister Connie the most.

Zvika: But how do you know that?

Machino: That is quite easy. All I have to do is calculate the normalized degree centrality functions of each character. Look at Illustration 2: 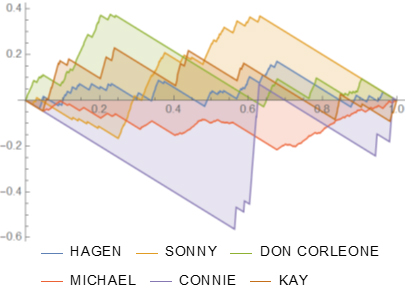 Illustration 2: normalized degree centrality functions, according to The Godfather script

Once I calculated the normalized degree centrality function, I need to calculate the correlation between Michael’s normalized degree centrality function and that of the other characters. In this case, I get the matrix in Table 1: You’ll see that all the numbers are between 1 and -1, with positive numbers reflecting a positive relationship, and negative numbers reflecting a negative relationship. I will calculate and show you the results. Here is the correlation matrix:

Table 1: Correlation between characters in The Godfather.

Zvika: I don’t believe you! You’re telling me Michael can’t stand Connie?! That’s fascinating. I have to admit I never considered the trilogy that way. But now that you mention it, I have to agree with you. Godfather I starts with Connie’s wedding. Michael is late, thereby insulting her; by the end of the movie, Michael kills Carlo, Connie’s husband, and then Connie fights back: she confronts Michael in front of his wife, Kay, near the end of the movie. In the second part of the trilogy, we learn that Kay divorced Michael. This tells us that the brother-sister relationship is central to the plot – it’s a movie about a brother and sister fighting for control over the crime family. This raises new questions about the movie, questions we might otherwise have not thought of: for instance, what repercussions does this relationship have on the other characters and plots? What does it say about the power struggles between men and women in the movie? Does it mean that it’s a feminist movie?

Machino: If you would like to gain a better understanding of the mathematics of the narrative and AI, you can take advanced courses in social networks, or read Prof. Zvi Lotker’s new book, Analyzing Narratives in Social Networks, available here