What does a mystery plaguing seamen for centuries have to do with a current research conducted at the Faculty of Engineering’s Temporal Optics Lab?

In 1995 an unsinkable drilling rig called Draupner E was built off the shores of Norway’s North Sea. It was supposed to withstand waves as high as 20 meters, although it was assumed that such huge waves can only occur once every 10,000 years. The rig was equipped with top-of-the-line devices designed to measure wave height, force, speed, etc.  Draupner E was only operating for about six month when it was suddenly hit by a 70kmh speed, 25 meters high freak wave. “Since the beginning of time, seamen would return from sea with stories about rogue waves appearing out of nowhere, sinking ships and disappearing, but no one believed these stories,” Says Dr. Moti Fridman. “The Norwegian rig survived. Barely. But that incident sent all the researchers back to the drawing board, including our team at the Alexander Kofkin Faculty of Engineering’s Temporal Optics Lab.”

Rogue waves are a local special and temporal occurrence. Unlike tsunami waves, which can advance thousands of kilometers and elevate only when they reach the shore, rogue waves are a deep-water phenomenon. They only advance a short length and in a very brief time. Oceanographers who studied this mysterious occurrence, analyzed cases of mysteriously sunken ships, and revealed three conditions for the formation of rogue waves: noise – a storm or another source of energy, non-linearity – enabling one wave to “steal” energy from other waves, and dispersion – an occurrence by which different wave lengths advance in different speeds, enabling a situation called Self Steepness, in which the wave becomes increasingly steeper. The meaning of this is that rogue waves don’t even look like waves, but rather like giant water walls appearing out of nowhere in the deep sea, advancing at enormous speed, crashing and disappearing. “The problem with studying rogue waves is that they are so rare you can’t predict when and where they will form. Which means studying, or even recording them, is nearly impossible,” explains Fridman.

Ok, so Bar-Ilan’s Faculty of Engineering has not opened an oceanography department, and Dr. Fridman’s specialty is nonlinear and temporal optics, which seemingly have nothing to do with oceans or waves. But after watching a program about rogue waves on the Discovery Channel, Fridman realized that his lab, dedicated to the study of temporal optics and fiber devices, is perfectly equipped to study this freak phenomenon. “Optics has its own monster waves. In our case its scorching light pulses that can burn devices, and just like at sea – it’s a sudden, unpredictable process and we are working hard to try and find solutions for it.  As it is, optics is the ideal experimental field for studying rogue waves, because optic waves are extremely fast. Consequently, even if there is a highly rare event, a once in a million or billion occurrence, you only have to wait one microsecond at most for the next rare event to occur, which makes it easier to document and study,” explains Fridman. “In additional we have the ideal tools to study such phenomena, since we are able to study ultrafast, non-repeating signals– the exact same traits as rogue waves.

Using his advanced lab equipment, Dr. Fridman was able to measure, for the first time ever, the internal structure of rogue waves of light, and identify the differences between them and ocean rogue waves. Using these measurements Fridman was able to create a model predicting rogue wave behavior, while considering the field’s vector features. “Until now, researchers studying rogue waves in light solved scalar equations, while ignoring the fact that the electromagnetic field is a vector,” explains Fridman. “We were able to discover one significant difference between rogue waves in light and in sea: in sea, the rogue waves usually come in threes, or what sailors dubbed “The Three Sisters”. In optics, on the other hand, many of the monster waves appear in duos. The reason is that light is polarized, and the polarization causes these dualities.”

Dr. Fridman began studying rogue waves about a year ago, which means it’s still early days, however his discoveries are relatively significant. “We are continuing our investigation into rogue waves, making new advances every day,” says Fridman. “I intend to continue studying these events. It will be nice to be able to predict monster waves, and use the ocean to learn about optics and vice versa.” 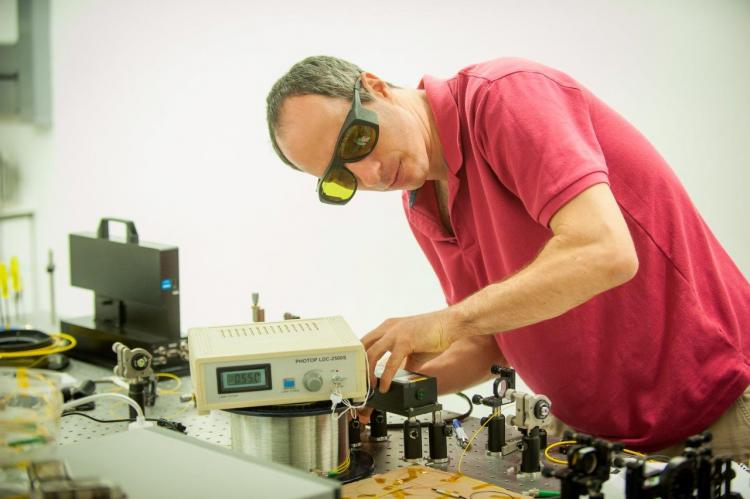